I've read quite a lot of posts lately on food that goes to waste.

For example, Nadja wrote about how much food we are throwing away. She had seen a documentary in Finland called " Arvokas ja herkullinen jäte", which can be more or less translated into "Valuable and Delicious Waste".

Jonas also wrote on the subject some time ago and from his post I found this link (in Swedish) that is worth checking out for ideas on how to lessen the food throwing in your own household. He is also giving some tips on how his own family is minimizing the food waste. Like making grocery shopping for a week and then doing fridge inventory every second day to use up the food that is going bad. This, the fridge inventory, I also found very useful in our old flat, as the fridge was very small and always stuffed, it seemed to have a tendency to hold suprises in the back... Unfortunately my inventory was more done on weekly basis and not so effective. I am happy though that the fridge in our new flat is really spacious and therefore it is easier to get an overview of what is in there just by taking a glance, and so far it has worked out better for us. On the other hand I am not sure how energy efficient such a big fridge is but as we are living on rent this is what we have and let's maximize the enjoyment of it as long as it lasts. 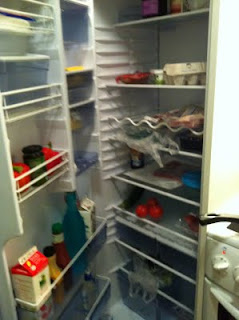 To round this post up I want to still refer to a very good post Emma wrote (in Swedish) on the "best before date". The best before date is to be used as a guideline and the food you have might be very ok to eat even after that. Smell, taste and look before you throw it and trust your senses!

Keep Tiger Prawns off your Plate

Got inspired to write this post when reading Emma's post on the book "Skinny Bitch". Will put this book on my reading list. Click on the link to her blog and check the excerpts from the book that she posted. So true!

I am now halfway trough the book "Lingon and Läppstift" by Noora Shingler and it is touching the same subjects on food. She left out milk, sugar, yeast and wheat from food when her tummy was troubling her. Even if I have been following her blog for some time the book defenitely gives a nice walktrough on why and how and has a great list of links and sources for those who are interested in reading more. I do recommend it.

After reading the chapter about milk and how we get a lot of antibiotics into our bodies from drinking the normal milk I convinced Stefan (who seems to not be able to live without milk) that we had to get ecological milk, and prefereably milk that had not been homogenised. (When we homogenise milk it loses a lot of good bacterias and vitamins).

For that we were lucky to move to Sweden. It was no problem at all finding both in a normal grocery store. In Finland I am not even sure where I should have started to look for it if I do not count the one eco grocery store I know in Kamppi called Ruohonjuuri.

Here's our ecomilks and even if they were a bit more expensive than the normal one it was worth it. The unhomogenised milk is so tasty and creamy and Stefan can stick to his addiction without getting the evil eye from me;-) 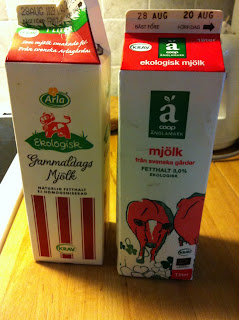 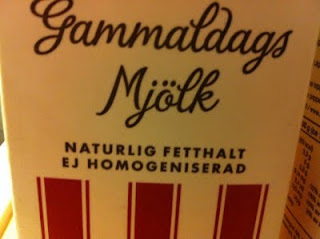 This is a post I posted in my other blog already months ago but I decided to re-post it here as it fits this blog better and I am reading the chapter about additives and E-codes in Noora Shingler's book at the moment:

Saw this documentary everybody (Emma, Nadja, Clara) is speaking of on SVT 1 some weeks ago. It is really quite scary how much chemicals we have in our blood. They have for example started seeing a relationship between babies being exposed to a certain chemical cocktail in a crucial time of their childhood will in their twenties cause them testicular or breast cancer.

The scary thing is that there is nothing you can do to get rid of the chemicals from your body that you have been exposed to. They will be around even after you are here. The only persons that will get rid of chemicals from their body is mothers while breastfeeding and consequently exposing their babies to a "nice mix".

To add on, the room in most houses being exposed to most chemicals is actually the kids playrooms full of toys.

Noora is also talking about trying to avoid as much chemicals as possible so we can minimize the risk of dangerous mixes. She refers to Bill Stathams book "The Chemical Maze Shopping Companion" and Evira's homepage (in Finnish). I think the Evira list is a bit messy to read but note that they have nowadays also a mobileservice for this. I haven't tried it myself but let me know if somebody else has.

I would also like to read Mats-Eric Nilsson's books on real food and food according to the seasons, let's see when I can spare a bit of time for that. You can also find an E-code list on his website (in swedish).
Posted by Cat at 10:18 AM No comments:

The Union of Concerned Scientists have a cartoon contest going on. Check them out and vote!

Picture from the contest.
Posted by Cat at 11:37 PM No comments:

You know when sometimes the perfect song plays at the perfect moment. On Sunday when driving back to the city from the country-side at 11 pm, just me and Stefan, Jarabe de Palo's "agua" started playing and it was just a beatuful moment. We were both sad to leave the country-side as it is one of our favorite places and we had had a perfect party the day before. We were also nostalgic as we are now experiences the last days in Finland before our move.

Emma also wrote a nice article (in Swedish) about water today. We do indeed have an easy relationship with water in the north. Drinkable straight from the tap and according to this article (in Finnish) Finnish tapwater is even more cleaner than bottled water. The bottled water contained much more microbes than the water directly from the tap. According to the research the quality lessened becasue the bottles were usually stored in room temperature and for longer times. The microbes are not a health risk but water with a lot of microbes is not considered of good quality.

Maybe something for us to remember next time we go shower, make a cup of tea or flush the toilet. We flush the toilet with water that is of better quality than bottled water. At least as far as I know it's the same water in my kitchen tap as in my toilet.
Posted by Cat at 6:25 AM No comments:

Email ThisBlogThis!Share to TwitterShare to FacebookShare to Pinterest
Labels: water

On the blog Smartypants there is an interesting article on Economic Growth.
Posted by Cat at 12:17 PM No comments:

I can't say exactly when my interest about ecological and environmental living begun. I think the interest was always there but it took some time until I became more aware of my own choices in the stores. My head was crammed with all the marketing and I was an easy target. A marketers dream. However, as more and more eco things appeared in the food store it felt like a natural choice for me to chose those products. Little after that I also became aware of my shopping habits outside the food store.
I used to buy a lot of clothes that I didn't really need and the more crammed my wardrobe became I realized it was insane. Why did I need to shop more? I already had everything I needed. As a first step I decided to start buying second-hand clothes instead and not long after that I stopped almost completely buying any clothes at all. I was somehow a little blind to my own shopping until I took a step back and spent some time off from the stores and the sales.
We're not in any way extreme in our shopping habits but I do try to consider nowadays a bit more what I buy. I try to avoid new stuff if I have something that works and there is a lot of nice and fully functioning second-hand out there. I also consider the material and the transportation. Can I buy this locally produced? Can I avoid plastic wrapping? Can I avoid additives in food?
Not only I feel better having less stuff around but I've saved up on the money and hopefully I'm doing a good thing for the planet as well.

Some things I have bought recently are: 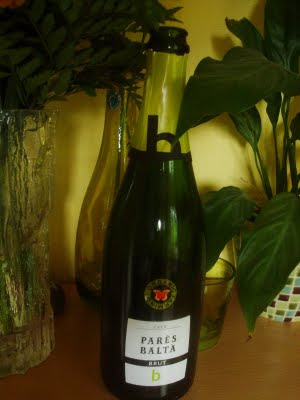 Some bottles of this ecological cava for our engagement party. 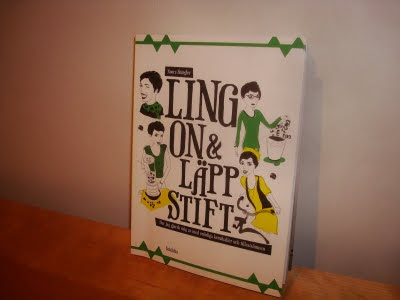 Noora Shinglers book on how she got rid of unnecessary chemicals and additives. Read her blog (in Finnish) here. I've followed her blog for some time already but it will be interesting to read the book. After all it's on subject I am very interested about.


Here is some links to a couple of other posts in my other blog on the subject. Link and link.
Posted by Cat at 11:17 AM No comments: