Learned that 90% of the soya produced is GMO (genetically modified organism) and that a lot of rainforest is cut down for the soya production. Unfortunately, most of the soya produced will be fed to cattle for producing meat for us. So even if I personally never buy soya, since I don't like the taste, I probably eat meat or drink (or have drunk) milk from cows that have been fed with GMO soya-beans. Not-so-nice!

Valio has apparently done a good move and stopped using soya for their cows but instead they are using canola (raps in swedish). According to Juha Nousiainen, the CEO of FarmServices in Valio, raps contains even more protein than soya. So good going Valio!

Palm Oil is another product that the rainforest has been cut down for and the production is continously growing. Unfortunatly, it is extremely difficult to avoid palm oil as well as it is in everything from shampoo to cookies and usually labelled "vegetable oil". So I did put my snack in the wrong throat when I read this on the back of the bag: 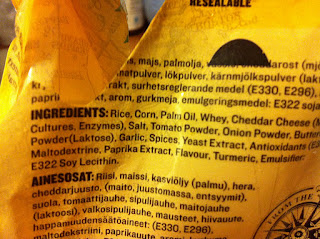 No more Mexicanos for me! 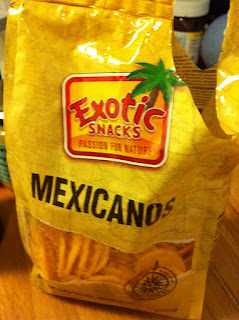 In Australia there was an attempt to make a law on labelling palm oil in food but it seems it didn't pass in the end. I wonder how many products here are labelled "vegetable oil" or similar for palm oil, wouldn't be all too bad to know for sure.
Posted by Cat at 9:35 AM