Rädda Mannen -Save the Man Conference

I woke up this morning with the theme song from the Monk TV-series in my head. It might not be that strange as the information we got yesterday would very much suit the theme lyrics. Monk suffers from intensified obsessive-compulsive disorder and has different phobias, one for bacterias, turns out he should be scared of chemicals as well!


Here is a sum-up of the conference yesterday.

Why was it called "Save the Man"?
Because a lot of chemicals in our environment have been found to affect our hormonsystems: men produce less and less sperm, there are more babygirls born than boys and some of the boys are born with malformed genitals.
Additionally, chemicals or "chemical cocktails" also cause us cancer, obesity, asthma, allergies, ADHD, ASD... the list seems to be endless. Obviously, these chemicals also affect our environment and animals. 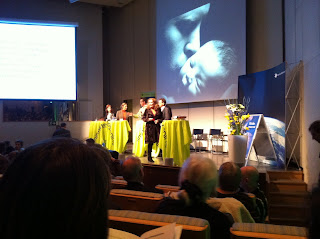 During the conference a new study was presented by Naturskyddsföreningen's chairman Mikael Karlsson on how much chemicals was found in fish in 9 countries all over the world. They found chemicals like dioxins, DDT, PCB, brominated flame retardants, fluorinated pollutants and the heavy metals cadmium and mercury. Many of the substances were found in levels way over the healthy limits. Note that these fishes would have ended up on somebody's dinner table if they would not have been part of the study. The whole study can be found in Swedish here and articles here and here.

One problem at the moment is that we use syntetical chemicals before we know if they are actually dangerous or not, thus creating chemical cocktails in the environment. Mikael Karlsson made a metaphor saying "it's a bit like making an omelette out of all different mushrooms we can find in the forest without knowing which ones are toxic or not".


Also, the book "Den flamsäkra katten" - "The flame retardant cat" - was launched during the day. The book can be bought here. 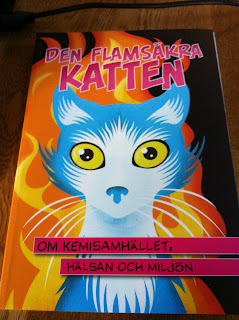 The authors of the book, Anna Froster, Magnus Hedenmark and Roger Olsson had a very cool presentation. Basically, Anna started worrying about the chemicals in her surroundings when she got pregnant and was shocked to found out that they are absolutely everywhere. In our food, clothes, home, even the new stroller they bought for their kid was flame retardant; so perhaps not so safe for the baby? Especially, since the flame retardants do apparently not even save people from fire, meaning they are not fire proof. 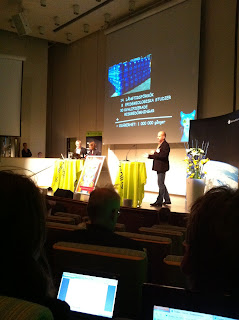 Another interesting case was that Cats seem to be more exposed to chemicals as they are crawling around on the floor where chemicals lay around in, for example, dust and particles. The cats had 20 times more flame retardants in their blood than a normal grown-up. Unfortunately, small kids also crawl around on the floor a lot, so why would they not be exposed as well?

Other speakers we heard during the day was Aleksander Giwercman, specialist on mens' fertility, Merete Eggesbo from the health institute in Norway speaking about obesity and Åke Bergman from Stockholm's University about the effects of endocrine disruptors.
They all at some point in their presentations touched the subject of how exposure of a different chemical or chemical cocktail at diffent points of time in your life might trigger diseases or mess with your hormones in your body at a later point in life which is why it is difficult to make studies on this. For example, when fetus mice was exposed to an extra dose of oestrogen they suffered from obesity as grown ups. Many diseases might be linked to similar exposure of chemicals in the fetus stage or infant stage when a child is extra sensitive in its developement. Another factor that makes it extra difficult for studying the effects of different chemicals is that we all react differently to different chemicals.

An area of concern is the fact that EDCs, Endocrine Disrupter Chemicals - synthetic or artificial hormones - are continously increasing. Hormon signals co-ordinate our body's organisms and functions.

In the afternoon there were different seminars we could attend. I followed a very interesting one where Leonardo Trasande from New York University talked about socio-economic costs of chemical diseases and Lars Drake from Kemikalieinspektionen talked about how economical instuments (like taxes) can be used to prevent or lessen the use of chemicals.

To round up the day, the conference ended with two debates, one with researchers and entrepreneurs and the other one with politicians. Very lively debates, let's hope the politicians took the facts and these matters to heart. 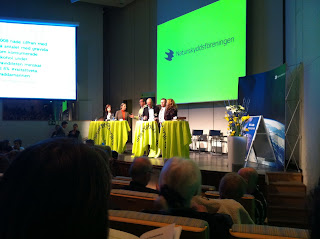 So, what can you do to avoid chemicals?
- buy eco-certified products or second-hand
- check not only what you eat but also what creams and cosmetics you use, our skin absorbs a lot more than what you might think.
- try to influence politicians and businesses
- educate your friends on products that you learn are harmful

What can businesses do?
- Businesses that are proactive and do more than necessary already now will not have to go through heavy adjustments at once when the laws will be pushed trough (which they hopefully will be!).
- The SIN-list (Substitute it Now) might be of help as it identifies the most hazardous substances, as known at the moment

If you are interested you can find what chemicals are registered in Europe at the moment at the ECHA-website (as a Finn I have to make a note that the ECHA, European Chemical Agency, office is based in Helsinki ;-) ) and CAS, American chemical society, will have listed the American ones. The list of registered chemicals are growing by the minute and one concern that Ulrika Dahl from the Naturskyddsföreningen brought up is how to handle this flow. Unfortunately, usually when one harmful chemical is prohibited it is quickly replaced with another similar one in chemical structure or at least with similar qualities ( eg. bisfenol a->bisfenol s).

Scary facts, as Monk would say; "It's a jungle out there".