Regarding time management it's a blessing to be a student again. Even if it's a lot of work, I am much more free to decide when I work on what.

Another thing that helps is that we don't watch TV since we moved to Sweden. We used to live without one for some time in Helsinki but for the last couple of years we had one. At the moment we have a TV but it's only connected to the playstation, so yes, we watch movies and some series on it but we decide when we feel like it. It's not bad as such to watch TV, it's just that I think that a lot of times we get stuck on something completely brainless. Don't get me wrong, though, there is a lot of interesting programs shown as well but most of the people turn the TV on just to see "what's up" and end up hooked on useless stuff.

Unfortunately now I am spending a lot of time that I would have spent in front of the TV in front of the computer, surfing the web, but I almost feel like I'm getting just a bit more out of that - most of the times I chose what I search for. However, I still need to work on getting myself away from the computer more as well and doing more useful things when I am in front of it.

Here is some links that got me thinking of this subject in the first place:

The treehugger post on how much our life is shortened by watching TV and graphs on how many hours we spend in front of the box.

Jonas posts (in Swedish) on why to stop watching TV. Basically he is referring to statistics that say that the avarage Swede spend 7 years of their life all in all watching TV, and by watching TV you watch also a lot of commercials which tell you to buy more stuff. He wrote another interesting post about our use of interet. How we surf bookbloggs & stores instead of reading books, food bloggs and recipes instead of cooking etc.

Therefore it was refreshing to spend some time on the Finnish counrty-side where I had to force myself to do other things than stay at the computer. I read more than usually, did some raking: 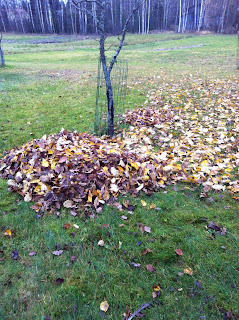 Had to heat up the house and the sauna: 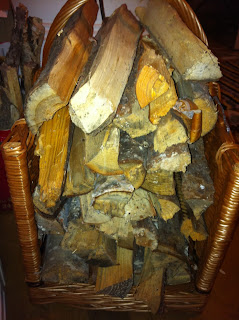 When it's pitch black outside the warm sauna was quite inviting. 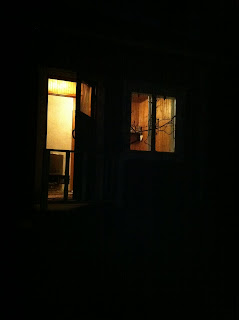 Peppe also wrote an interesting post (in Swedish) about how the future TV media will look like. Already now web-Tv is more and more popular than traditional TV and the programs we watch are maybe not the same as before.

Perhaps the younger generation who will grow up with internet will find tradtional TV-watching boring?

In whichever case, the sun is out so I'm gonna reluctantly leave my internet and take the dog for a walk in the sunshine before it's dark again.
Posted by Cat at 11:15 AM