I did Ashtanga yoga more and less regularly and at different places when we used to live in Helsinki and I have experience from at last four different teachers. The best one was a yoga teacher who was also a physiotherapist, she understood the body mechanisms and I got many great advices from her. Like, I should put equal strenght on both arms and that my legs are straight when they do not look and feel completely straight to me because my joints have a tendency to overextend. This might sound obvious, but sometimes it is difficult to notice these things yourself when you are sweaty and just try to reach your toes in a, what feels like, impossible position.

In any case the last year in Helsinki I didn't do any yoga for several reasons and when we moved to Sweden I decided to start again on my own as I already know most positions. I bought a DVD just to remember the order of the different positions because there is an idea behind stretching some muscles groups before others in ashtanga yoga. It was quite a disappointment when I realised just a year had passed and I was really stiff again and couldn't even reach my toes. I think I had enjoyed astanga yoga because I had never been as flexible as when I trained it.

As I prefer to do my yoga in the morning I haven't done yoga so many times during the winter but I've tried to yoga more or less once a week. Last week it finally felt like I am getting somewhere with the yoga again so let's see how this 7 days yoga challenge affects my body. Hopefully I will see some more changes now!

I started this morning and so far I feel ok, just super thirsty, which is normal after yoga. For me the sun salutations in the beginning always feel worst because they are quite tough until you get your body warm and then I'm ok until the fish pose, which is really though on the neck. I'm happy because the last two times I've managed to do a bridge which was a complete impossibility when I took up yoga again after the break. After the yoga today I want for a walk with the dog but had to sit down in the middle to rest a bit and enjoy the flowers, apperently you shouldn't eat straight after yoga but I'm always starving just after, pehaps because it makes puts my metabolism working. 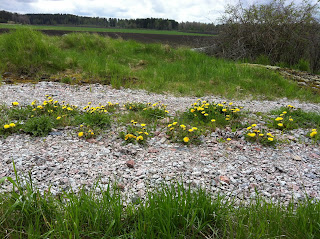 I think why I like Ashtanga yoga so much is because it is pretty tough and you do not stay in the same positions for to long. Additionally, I prefer the breathing technique to other yogas' I've tried. Still you have to have patience because the results take time.

Any one else up for the yoga challenge? 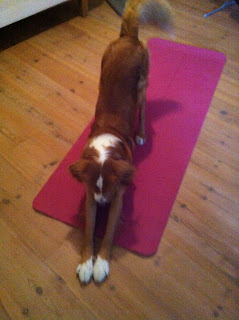 Our dog in, what else, but the dog position, he likes hanging around when I do yoga which is not always preferred but he's too cute to tell no to!
Posted by Cat at 5:25 AM