On Sunday we went blueberry picking so now we have a little reserve for the winter in the freezer. That is the cool thing with the Nordic countries, Allemansrätten, the Right to Public Access. In practise it means you are allowed to move around in nature and pick mushrooms and berries as long as you don't trash or make damage, so with the freedom comes also responsibility. 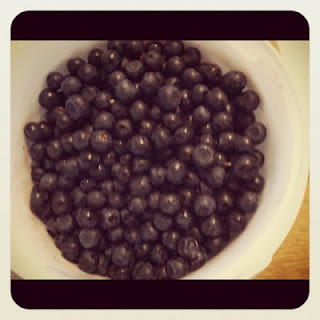 The last years though there have been some problems during berry picking season because it has become commercialized. Since two-three years ago, at least that's when I started noticing this, people started coming from different countries to pick berries with the hope (and the promise?) to get paid a good salary for it (which is usually not the case). This year there has been some trouble in the north Uppsala area because an unexpected +500 people arrived to pick berries, a lot of them from Bulgaria, it was expected that maybe 30 people would come. The company Stora Enso who owns the forest have filed a complaint since they claim these people have violated the Right to Public Access, by cutting down trees and making fires etc. (Article here in Swedish and one post in English more generally on the subject).

It would be such a shame if the Right to Public Access would be threatened because of incidents like this. It's also sad that something that should be enjoyed by everyone for free, like the berries, is instead squeezed for money by whoever gains from this berry picking business, somehow I doubt it's the berry pickers. Additionally, I doubt that this sort of organized berry picking would neither follow the unwritten rule that you should only take so much so that there is left for somebody else to take.
Posted by Cat at 3:45 AM