A little bit sheepishly I had to admit to Stefan that I was not sure of which grain was which of the grains that are growing on the fields behind our house. So I had to come home and google. Let's see if I got this right now. 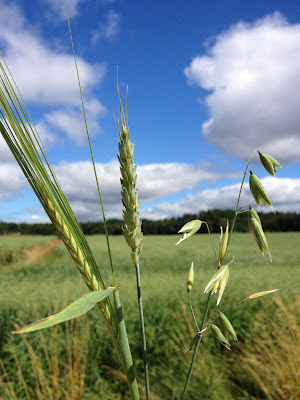 From left to right; barley, wheat and oat.

There's a lot of talk about the disconnect with food in our society lately. How expecially young people don't realize where the food comes from and how it is produced. I can't but agree. The wheat in the store doesn't look at all like in the picture, right? How many things do you have in your fridge/cupboard that you acctually would know how to grow? Know how it looks like? Know where it comes from? I think that it would do all of us some good to trace a meal's components from the plate back to the field/farm one day.

In the future though it is not so sure we will have access to so much food, especially exotic food, if the oil prices go up (which they are very likely to do) because the food system right now is dependent on oil. Here's a trailer for the movie Best Before, which explores alternative food sources in London.


Do you grow any food yourself? I can't say that we grow much more than basilica at the moment (and I'm suprised it survived while we were in away for a month) but it would nice to grow some more stuff ourselves in the future.

If you already grow your own things, here's a real challenge for you; this guy lived on things only grown and produced within 100 metre for a year (link found at Little Eco Footprints blog). Beat that!
Posted by Cat at 12:30 AM