I thought I'd do a post about the wedding again, let's talk about one of the favorite parts according to me, the music.

As we had a civil ceremony we were lucky to have nice enough weather to have it outside by the river close to the restaurant. It was a family friend of ours who sang and played the violin and she brought a friend from her school that played the guitar. 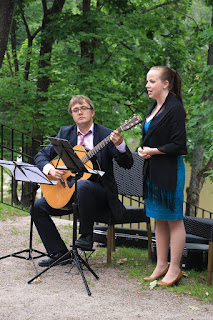 Our processional was a violin version of Enya's "May It Be". It was supposed to be a fun thing, a little hint for our friend who likes Lord of the Rings. In the end he couldn't make it to the wedding but at that point we had already started to like the idea of having this song so we stuck with it.

In the middle of the ceremony they sang their version of Kent's "Utan Dina Andetag", something like this one. (Original version here).

Our recessional was Colbie Caillat's "I do", I wanted something a bit more happy once the ceremony was over and this one was both cute and makes anyone in a happy mood.

During the dinner they still played Mercedes Sosa's "Gracias a la vida", original version here, I like this version better though, and best I liked the version they played, (awesome!), unfortunately I don't know if anyone has it on video.

For the dancing we made our own playlist in Spotify. We put some time in thinking of the music as we wanted all the people to enjoy the party and we had Finnish, Swedish-Speaking Finns, French and Spanish guests (and few other nationalities like one Hungarian and one English). My criterion for the songs was that we are not allowed to have any songs that we don't stand listening to ourselves and if we can think of songs that remind of us some guests, great! Additionally there should be something all generations like and they should be danceable. Some family and friends we also asked if they had any song they would like us to play but few actually gave us some suggestions.

If you have Spotify you should be able to listen to our playlist from here, I hope! I added now also Cyndi Lauper's "Girls just wanna have fun" which we used when I threw my bouquet and Maná's "Clavado en un Bar" which was used when Stefan threw the garter. After that there was a few songs we skipped but I let them be in the list now anyway. They are not necessary songs we would listen to otherwise but they did work for our party, the dancefloor was never empty!

Email ThisBlogThis!Share to TwitterShare to FacebookShare to Pinterest
Labels: wedding