As the student union at my university, SLU, turned 80 they had organized some lectures for inspiration about the green future on Wednesday. I didn't make it to the two first presentations but I'm happy I managed to go to the last one with the chef Paul Svensson, who talked about sustainable cooking. Finns might know him from the TV-series Strömsö. I sat quite far back so the quality of the photo is not that great but you can check better photos at the AbsolutAgronom blog and read about the other two presentations there (in Swedish). 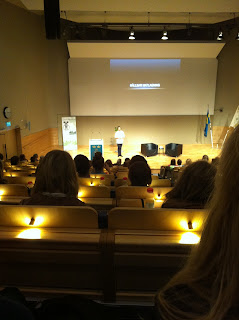 I really liked Paul as a speaker, he was both funny and informative and seemed to be doing it with ease. He started with giving us a little bit of a historic background on cooking and also talked about a revelation he had when he was travelling for work on why we have so different cooking styles in different parts of the world. From good quality food produce you can build up a beautiful presentation of a meal around the vegetables without even complicating it too much but if you have vegetables that taste mostly water from produce that has been grown on depleted soils it's a different story. Luckily in the Nordics we have quite easy access to relatively good seasonal quality produce.

He talked about his own cooking philosophy, he's not a vegetarian but he uses meat mostly as side-dish or only for taste. His meals are always built up on what vegetables are in season locally and then he adds meat and fish. He gave us an example where he had used fried fish merely as croutons in a dish to give taste. He emphasized again the necessity for good quality produce, if you have good quality meat with good taste people will be happy with less and if farmers specialize in having produce with a their special own tastes it will give the food additional value. In Paul's view we need to move away from the idea that all food need to look perfect, a few brown salad leaves are not gonna kill us. Additionally, you can cook different things with the produce in different growing stages, for example different sprouts are just as good or even better than the full grown sometimes. Additionally, it is not necessary to import rice when we have lots of local grains that are just as nutritious.

He also talked about the need for cafés and restaurants that want to be sustainable to not only think about the food. They need to think about the whole concept from what people are gonna sit on to what they are gonna eat from. He will open his own café in Gothenburg end of next month where for example chairs and porclain are second hand. As they didn't want the café to have a vintage touch they bought second hand porclain only in white and painted all the chairs white. It is possible to create almost whatever from second hand, there is already so much material in the loop that upcycling is easy!

His last slide contained these sentences (sound better in Swedish):


If you want to learn more about his philosophy he has written a book in Swedish. Another cook book that defenitely could make it to my kitchen.
Posted by Cat at 3:26 AM