It's some time ago I wrote about reducing flights. I decided to write about it again since both Karin and Maria  (both blogs in Swedish) recently has brought it up and me and my husband are flying to Spain for Christmas. I have remorse about flying, but I also have remorse for not having spent Christmas with my husband's family since Christmas 2007. We were thinking of doing the trip by train but this time our time schedule does not really allow it, I also think it might have been more expensive in the end to take the train. Flying is (unfortunately?) very convenient.

I will also fly over to Finland once before Christmas. We usually take the cruising boat, but as it turns out it is not more ecological (link in Finnish) to take the boat for such a short trip (depends what sort of boat I guess but now I'm taking the cruising ships going between Helsinki and Stockholm). I guess there might also be a little different outcomes depending who has done the calculation but according to the calculation Noora Shingler has referred to in her blog by VTT ( Technical Research Centre of Finland) there is slightly less CO2 emissions taking the plane, and significantly less sulfur and nitrogen emissions by taking the plane. So turns out I might just do the right thing taking the plane there. On the boat there is additionally usually more consumption done than on the plane (food, tax free etc.) so that should add to the environmental costs as well.

Karin is asking those flying several times per year just for holiday how they justify it. I can't say that I have always been thinking about how I fly, but the last years I try to fly less. How often do you fly? Do you think about the emissions it causes? I once talked about flying to my friend who has worked as an air-hostess, she replied something in the lines of that surely one plane carries so many people that it would create more emissions if they all would take cars or other travel measures to go to the same destination. I don't know, is that so? An interesting question is that would people then take the trouble to go those places, if there wasn't planes?

We might just find out soon, according to professor Kjell Akelett, in today's morning show on radio P3 here in Sweden, we will run out of oil in 10 years. I guess today I'm a little gloomy, 10 years is an awfully little time for transition from oil. Can we do it? Perhaps, but I can't put my head around why we aren't more already. 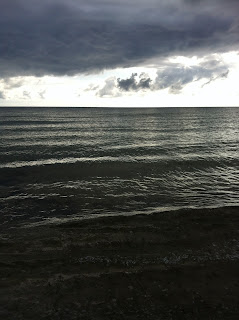 Pic from Öland this summer, Öland an island on Sweden's coast facing a future of erosion, lack of drinking water and is in risk when the seas start rising. I reacted to Maria's post on this as we were there this summer and the drinking water there was yellow (so nobody wanted to drink it), also the sea water was quite disgusting to swim in, so dirty!
Posted by Cat at 3:59 AM