I wrote about sea-level rise just about a week ago and yesterday there was the news that sea levels are rising 60% faster than expected. Coincidentally, there was also a small notice about floods in Venice in the newspaper called "18 minuter"(similar to Metro) the sort of free newspaper you get on the bus that I stumbled upon. I'm sorry about the bad quality of the pic, the bus was pretty bumpy. 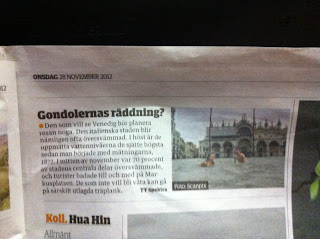 In any case, the notice says that whoever wants to see Venice need to plan it well as the city is flooded very often. This autumn the water levels were the 7th highest since they started measuring the levels in 1872 (would be interesting to know though when the other 6th highest have taken place!). Some weeks ago 70% of Venice's main parts where apparently flooded and the picture is tourists having a bath on Piazza San Marco. 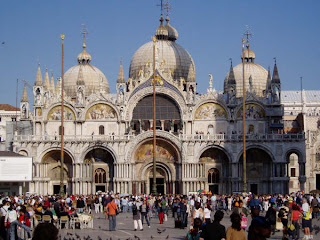 My experience of Piazza San Marco in 2005 when I was exchange student in Italy, luckily no swimming involved.
Posted by Cat at 7:03 AM