On the Economic Crisis

Here's a hint that some people in Spain are not completely happy with the banking/economic system. During the night somebody had painted the white footsteps in the picture below outside the bank door and the text "tu pagas, ellos ganan" on the door when we were in Valencia. This means more or less "you pay, they gain" in English, referring to that the bank gain of course, and the footsteps show a guy entering the bank with shoes and leaving without. 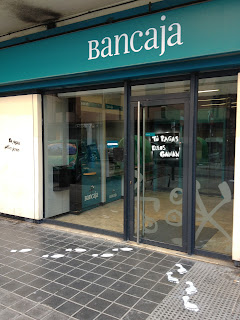 The prices to rent or buy apartments here are really cheap compared to prices in Helsinki, which are for me the best reference. 53.000 Eur for 70 square meters in Valencia, also there are apartments for rent and sale wherever you go. I just did a quick search and the cheapest apartment I could find for sale in Helsinki with 70 square meters is 159 000 Euros; even though I am not sure the cities are comparable. 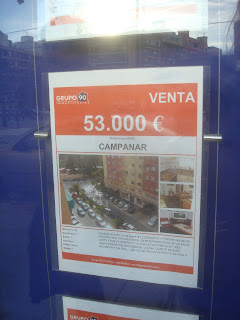 Here's a text I wrote for an assignment on the Spanish mortgage and property crises in the autumn because I wanted to understand it better.

Spain’s mortgage and property crisis had a lot of causes that blended all together to hit the country hard.  The beginning to the property crisis for Spain could have been the entry into the Euro-zone that lowered interest rates and increased the demand in the real-estate sector, which in turn increased inflation (Shachmurove and Shachmurove, 2011, p. 14). However, another reason can be traced back to the 70’s and the deregulation of the banking system and tax-regulations in Spain that encouraged ownership of houses instead of renting. (Hill & Myatt, 2010, p. 259-260; Shachmurove and Shachmurove, 2011, p. 14).

As the property owning was encouraged, Spain had one largest number of mortgages per capita. However, as the construction sector drove the country’s economic growth, companies kept on building which eventually hit a turn with the bubble burst (Daley and Minder, 2010). One of the banking policies that were utilized was long loans, up to 40 years or more (Shachmurove and Shachmurove, 2011, p. 12), and additionally, the loans were sub-primed or primed, sold off as securitized mortgages to financial companies (Landon and Minder, 2012). Now, homeowners are stuck with the loans, which they probably never can repay, or have to consider selling the houses but losing 40-50 percent of equity (Chakrabortty, 2011). Banks in turn are trying to get rid of the property rights in their Balance Sheet with big discounts and special mortgage rates. (Daley and Minder, 2010).


As previously stated, some argue that the bubble could have been avoided without the change from pesetas to Euro. Krugman (2010) argue that if Spain still had pesetas they could easily solve their economic problem now with devaluation of the currency. However, another reason was probably the deregulation that pushed growth but destabilized the global market (Hill & Myatt, 2010, p. 261-263).


So what could have been done differently and what sort of regulations could have been put in place? These are my own reflections: banks could have had better background checks on who they loaned to and stricter evaluation of properties and land. Government could have had stronger regulation on urban planning, not to build too much, and encourage renting as well as purchasing. They could also have pushed for stronger transparency and better reporting from banks. The people taking loans should perhaps have been informed better on the risks of long loans and the benefits with renting. There could probably have been actions taken towards corruption as well, however, this measure should be taken from an institution that is not already involved in politics in Spain.

You can go back to look at the video I posted before on the crises of credit and how sub-prime loans work if that's a new concept to you. And as we are on the subject of banks I still want to post a video with Ben Dyson and Andrew Jackson from Positive Money and their view on what is wrong with the banking system.

Email ThisBlogThis!Share to TwitterShare to FacebookShare to Pinterest
Labels: economy