A dear friend of mine introduced me to Coursera, which has free courses online. Now, you might think I am a bit crazy to just be finishing my thesis and already jump into a new course. But it seems so interesting, and it is! So now I'm enrolled to a ten week course on climate literacy. So far I can only recommend it, let me also recommend the podcast Climate Report of which one episode is one of our optional course material. You can also find this podcast on iTunes. 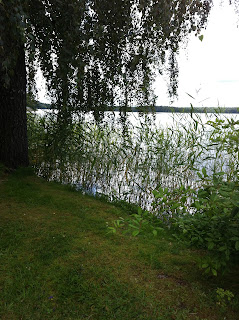 Started out this morning reading yet another gloomy article (link in Swedish) on the state of the world, even if the essence of the piece is that there is still time (but we have to act now). We heard that before though, haven't we?

Got in a better mood after seeing this video from Climate Reality though. Communicating on climate change is a difficult task. Even if we probably need a little bit of both, serious articles from scientists warning us and silly videos making jokes about something serious, the message might come across easier to a wider audience in the video. What do you think?


I was happy to finally get the chance to read Alan Atkisson's book Believing Cassandra as it was one of the course books we could choose to read in the same course we as are doing the Scrap Lunch event in.

Other books we could choose from was


I chose however Alan's book as I've seen him lecturing and this book has been on my reading list for a while. I guess the next book I will take on will be Ken Robinson's Out of Our Minds as I bought it as well because I am a great fan of his Ted talks. The people who had read The Sacred Balance really recommended that book though so I might have to try and get hold of it as well in the near future .

Back to Believing Cassandra. 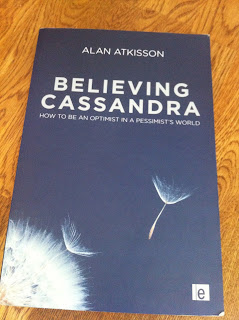 Why was it a good book?
Because it's a really good introduction to the sustainability challenges we have around us and what we can (and should) do about them. As Alan shares personal stories throughout the book it never gets boring or too heavy.

To who would I recommend this book?
To any newbies on sustainability! I think Alan is easy to take in for people in any field or with any interest as he knows how to appeal to a wide audience. However, if you have already read a great deal on sustainability the book might not give you a lot of new things. On the other hand, as it is such an easy read this might be the book you want to turn to the days you don't feel like saving the world for a motivational push to keep going.

Time flies when you are having fun

I realized that my last blogpost was more than a week ago. So what has happened?

Exciting times ahead, I've been so caught up in just doing what I have to that I haven't really had time to contemplate much about the future. Obviously, we're both happy and sad about leaving Uppsala and it's both exciting and a bit unsettling not to know exactly what will be the next step.
Posted by Cat at 3:49 AM No comments:

Susanna posted this Ted talk the other day and I thought I have to share it too as it was so inspirational. I thought of this proverb while I saw the movie.

“A society grows great when old men plant trees whose shade they know they shall never sit in.”
So here comes the Ted Talk:

What are your favorite reforestation projects or other projects for saving forests?

I have admired the campaign "Stop Talking. Start Planting." and I like the Bloomtrigger project's creative way of working. This morning I also heard about the Save Wolf Lake project, this forest is the world's largest old growth red pine forest.

On Monday I went to see the former Finnish president Tarja Halonen speaking in Uppsala University about women's participation in the sustainable world. She was the speaker of 2013 Dag Hammarskjöld foundation lecture and as a Finn it was of course nice to see that they had picked our former woman president as a speaker. 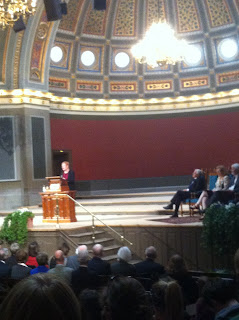 It was nice to see she was so humble even as a former president and the lecture was nice but unfortunately she had a flu so her voice was not at her best which is why I couldn't hear her all to well all the time. Some interesting points I took note of though; 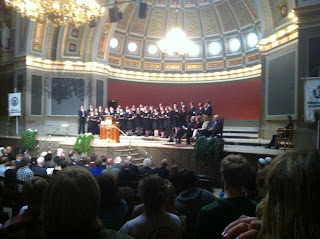 If you missed the lecture you can see the filmed version here.


Sorry for being quiet on this blog lately. I hope you are following the Scrap Lunch project blog in the meantime. Finally on Saturday we had our event and it turned out well, I think we all enjoyed it the day! Even if my team was really really busy. Someone was suggesting we should do one every month but I don't think they realize how much work was but behind, but perhaps in smaller scale and without workshops we could do it again.In the same course we are supposed to write an article and publish it somewhere on a topic related to our project. So here we go;

Food Security: an ethical issue?
There are many definitions of food security but one of the most recurrent ones is from the World Food Summit in 1996: “when all people at all times have access to sufficient, safe, nutritious food to maintain a healthy and active life” (www, WHO, 2013). World Health Organization, WHO, expresses on their website that food security is a complex sustainable development issue and there are several opinions on whether or not we need to increase the food production in the future to feed a growing population.

The fact is that the food waste in the US supply chain alone could contribute to satisfying the hunger of each and every one of the nearly one billion starving people in world (Stuart, 2009). Therefore, it is about time that we do something about the food waste issue. Every year about one third of edible food produced in the world is wasted, that is about 1.3 billion ton per year (Gustavsson et al. 2011, 4). While food is wasted in all stages of the supply chain, in developing countries it is mostly in the production stage. In developed countries edible food is also thrown away in significant quantities in later stages of the supply chain, including households.

So is the problem merely a problem of distribution and access and, if so, whose responsibility is it to fix it? Western society has had a tendency to blame structural and systemic problems on someone or somewhere else rather than actually fixing the structural problems in the system (Meadows, 2008, 4). For example, the food issue was reduced to a production problem thus “solved” by increasing food production. However, the hunger problem persists (Ibid.) while we continue to waste food in large quantities. The reason for this is that systems are difficult to comprehend and it is even harder to know where to intervene in a system to make changes that will solve the structural problem (Meadows, 1999). Additionally, context and social norms are affecting our behavior (Holmes et al. 2011). Customers nowadays want, for example, yellow or even green bananas which mean the brown ones are thrown away even if there is nothing wrong with them (Strid et al. 2013, 6).

A recent project at the Swedish Agricultural University has looked closer at how to lessen the food waste in grocery stores in Sweden (Strid et al.2013). The conclusions are pointing at two ways where there is room for improvement. The first way is to improve the flow of products through the store, by buying less or storing it right. It makes economic sense for stores not to buy more than what they sell as that is a lost investment. On the other hand they don’t want to show the customers empty shelves. The second way is to take good care of the edible waste that appears by making use of it by, for example, selling it cheap to catering firms or even freezing it and selling it cheaper later on. In other words, they have identified points where the system could work better.

It appears that food security could at least to some extent be solved by simple waste reduction. It should make economic sense both to companies and households not to waste resources. The distribution problem is more difficult to solve but probably not impossible. There is also room for more effective production methods in developing countries so food is not wasted in this stage.

Therefore we need more of these new ideas all through the food supply chain to keep developing the food systems towards a sustainable future. By simultaneously improving the food literacy that the younger generation seems to have lost we could effectively improve how the Western world values food. By valuing food higher, food waste would naturally become something to avoid in the whole food chain.

Meadows, 1999, Leverage Points-Places to intervene in a system, The sustainability institute