Seems like a really nice movie in the making!

At the moment I'm spending my days helping out at Villa Mandala until my "real" job situation gets settled. Villa Mandala is a retreat nearby from where we live, one of the owners has just published a book (in Finnish) with tips and exercises for stress relief. Villa Mandala is a really beautiful place so if you have the opportunity take the time to spend some days there.

In general I am trying to spend less time at the computer and more time outside enjoying the summer weather. It has indeed been tropical weather here the last days and we are just waiting for some rain to find some relief from the heat. I finally also planted some salad and herbs in the garden and now I'm just waiting to see how that will turn out. Hope to keep you posted soon.

Picture from the lake nearby.
Posted by Cat at 11:40 PM No comments:

In the process of unpacking...

...better get the desk in order soon. Right now my computer use is something of a mix of all three in the video below, which leaves me with a bad position both for neck and the rest of the body! Fortunately, I am spending much less time than normally by the computer though cleaning and unpacking. Actually, I better get right back to it now.

As I am now done with my master's in Sweden we have moved back to Finland (been here since lasts weeks Thursday). It's lovely to be back home but let's see where life takes us next, I'm now in the process of job hunting.

Anyhow, this morning I found out that a friend of ours who own a company called Corylus Avellana is a reseller of the KeepCup. Just on the weekend when we were staying at a hotel (for a friends wedding) I felt hopeless by the amount of cups being used once and thrown away so I definitely like the KeepCup idea! Like their slogan says; Salute the Reuser!

A Story of Debt

Just finished reading the e-book "a Story of Debt" based on the blog with the same name. The book is about Ashley and her journey of paying off her credit card debt. I would have been so stressed being in the same situation as hers, with three credit cards nearly maxed out. Luckily I'm mostly always quite reasonable with my money. While reading the book though I cheered for Ashley along the way because she is so open and honest about how she got into debt and that she had to work really hard to get out of it.

The most interesting part of the book related to this blog is near the end when she realizes that buying stuff is not bringing her happiness. As the book is based on a blog the entries are not super long and they are easy to read so I found it was the perfect e-book to have on my phone and I could just pick it up whenever I was bored somewhere. And I did get inspired to spend less, even if we are not in great debt (at the moment we have some of our house loan left to pay), but most of all I got inspired to clean out unnecessary stuff and try to keep them out of our home. This is a good thing because on Wednesday we are moving back to Finland and we really need to take as little stuff as possible as we will only have limited space in the house there (we already have too much!). So let the cleaning begin. 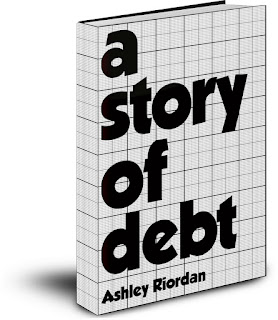 Pic from Ashley's web page
Posted by Cat at 3:05 AM No comments:

I think this picture that I saw on Facebook yesterday initiated the nightmare I had tonight. 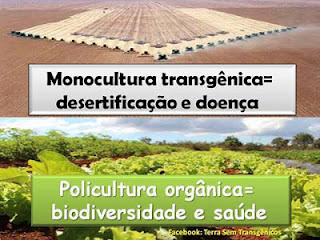 As I understand it ( I think it's in Portuguese) the picture says that monoculture will lead to desertification while polyculture will keep biodiversity healthy.

In my nightmare global food production was for some reason taken over by an area in China. The production took place in a closed area with huge fields of GMO monocrops and if any animal got into the area they were quickly shot. In my dream it was a horde of beautiful white horses that made the mistake of entering. Because of the monocrop way of growing the only food you could find was nachos in a bag, some sort of salsa in a jar, "spaghetti" from a machine and tomato sauce in a jar to go with that, it was awfully expensive and tasted awfully bad. Obviously the workers on the fields were wearing clothes with slogans like "Monsanto-global dominance" and were slaving away.

Such a depressing dream, I woke up with the feeling that there was really no need to live another day in such a gloomy place.

Well, it was only dream, unfortunately it seems to be a cloudy day today which hasn't raised my mood significantly so far.
Posted by Cat at 2:22 AM No comments:

I saw the movie More Than Honey yesterday at Fyrisbiografen in Uppsala with the Scrap Lunchers.
(The Scrap Lunch project is BTW looking for people who wants to continue working on the project for summer and autumn in Uppsala, so if you are interested contact them through the Facebook page.)

The movie, More Than Honey, is worth watching just because of the way it is filmed, I have no idea how they have managed to get such beautiful close ups of the bees. I guess some of it is edited, but beautiful nontheless. On the other hand it is mostly a sad movie, then again it's reality, the bees are not doing very well in the world. Bee colonies are collapsing, so called, CCD, Colony Collapse Disorder, and it seems no one really knows why, there's been talk about paracites or pesticides being the culprit. Can we live in a world without bees? Are humans or bees better at pollinating? These are some questions contemplated over in the movie. Watch it to get a glimpse into beekeeping in the 21st century, I do recommend it!

Run for a Cause

I run Blodomloppet yesterday in Stockholm for the organization Schyst Resande or Fair Travel. It was fun and it turned out that another girl from the group has also done (or is still doing) orienteering so it felt almost like the old days when I was running orienteering races. We only did 5 km this time but since I managed well perhaps my next goal will be 10 km. It's probably ten years ago I did 10 km so that could be a challenge! 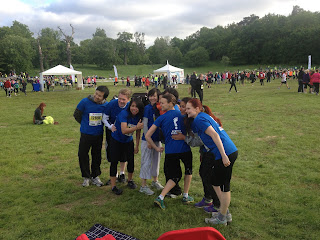 Have you done a run for a good cause or a run with a theme? It seems it is more and more common to have themes for the races. During warm up I got a leaflet stuck in my hand about the stop smoking race in Stockholm September. I guess these sort of runs are a good motivation if you are trying to get in shape or live a bit healthier but a part of me also likes running alone without all the hassle of so many people in one place. I am also thinking there might be quite an environmental impact after such an event if it is not done well. At least Blodomloppet in Stockholm was environmentally certified. 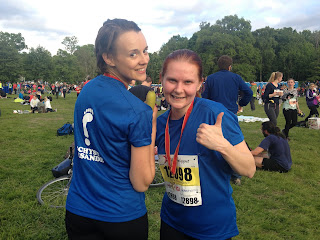 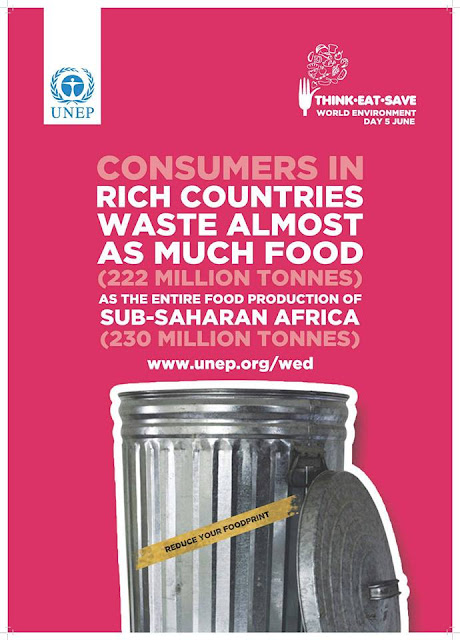