I have been doing mostly ashtanga yoga before, but lately I've been curious to try something else as I'm not so motivated to do ashtanga anymore. So I signed up for Yin Yoga and Flow Yoga on Thursday nights in Etnofitness. I had my first classes today and it was actually really good for me! Especially the Yin yoga. In this type of yoga you stay reaaaally long in one position but it's exactly what I need and I don't have the patience to do that at home. Flow yoga was more like ashtanga but as this was a beginner class we took it quite easy. I am in any case looking forward to go back next week! (only minus was that the music from the dance-class beside ours was interrupting our zen a bit).

At the moment I am temporarily living in the Sörnäinen district in Helsinki because of work. Hopefully soon I will know more about my future, if I will stay here for work or what will happen. In any case, most of the time I miss being on the countryside, but the advantage of being in the city is the availability of for example yoga classes and such.

I don't know how to describe Sörnäinen district in Helsinki, it has a little bit of a dodgy reputation and there is for sure weirdos (drunks) hanging around the metrostation at times but they don't bother you if you ignore them. However, there is also some cool things and especially food places popping up. Etnofitness has already been here for a while now, I used to go there also years ago when we lived in Helsinki but new things I've seen are for example the Soi Soi vegetarian restaurant (perhaps it's been around for long but I haven't spotted it), Fafa's (really good falafel, also available in other places in Helsinki), Moko café (lov-ely place), café Sävy (for coffee and tea drinkers) and Street Gastro (sandwiches). So I don't think I will at least go hungry living here. 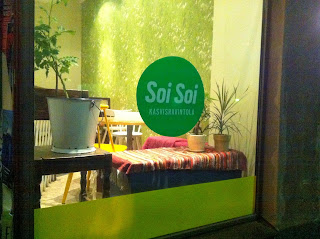